AGCO has announced a new engine that can run on recycled and potentially green fuels. The CORE75 engine that features in the recently released Fendt 700 Vario Gen 7 can provide almost carbon neutral operation and has a futureproof design that may see it further developed to run on hydrogen or become an electric hybrid. Director of engineering at AGCO Power Kari Aaltonen explains:

“Today, the primary challenge of product development is to get rid of the fossil carbon, or at least to radically reduce it. During the past couple of decades, AGCO Power has managed to reduce the emissions of the most harmful particulates and nitrogen oxide down to a fraction of the level they were a decade ago. The new engine is compatible with the renewable Hydrotreated Vegetable Oil (HVO) fuels, enabling up to 90% reduction in greenhouse gas emissions.”

When run on HVO fuels, AGCO Power diesel engines are already close to carbon neutral. However, the CORE75 engine has been designed to be compatible with future fuels such as hydrogen, ethanol, methanol, biogas, and could potentially operate as an electric hybrid with further development.

“AGCO Power CORE75 delivers 1450 Nm of torque, the highest in its power class. The engine is designed to offer maximal torque at 1300 RPM instead of the more typical 1500

The new engine is more robust, despite having fewer parts. This simplified design makes it more reliable and easier to service. It also meets even the most stringent emissions standards thanks to an advanced EAT (Emission Aftertreatment) system, which removes the need for an EGR (Exhaust Gas Circulation) system.

The CORE75 is the first in a planned wider range. It is a 7.5-litre, 223-kW unit designed for improved  torque, fuel economy and reliability. The engine’s design and positioning has also provided an improved turning circle and higher ground clearance. 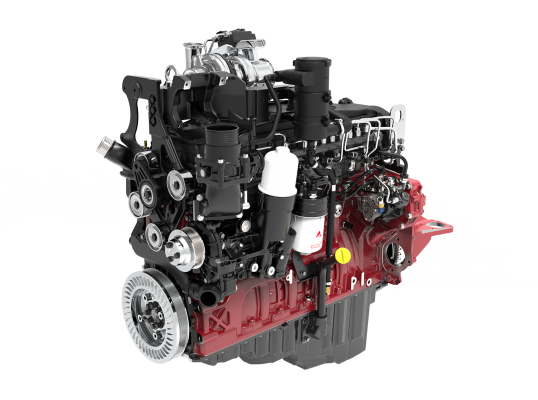 Caption: The New CORE75 engine has been designed to run on HVO fuels and may soon be running on hydrogen, bio ethanol, methanol, biogas or operated as an electric hybrid

Any cookies that may not be particularly necessary for the website to function and is used specifically to collect user personal data via analytics, ads, other embedded contents are termed as non-necessary cookies. It is mandatory to procure user consent prior to running these cookies on your website.